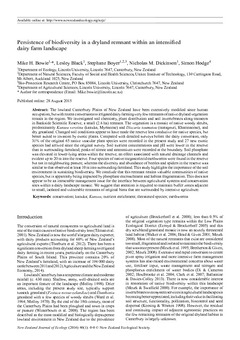 The lowland Canterbury Plains of New Zealand have been extensively modified since human occupation, but with recent conversions to irrigated dairy farming very few remnants of native dryland vegetation remain in the region. We investigated soil chemistry, plant distribution and soil invertebrates along transects in Bankside Scientific Reserve, a small (2.6 ha) remnant. The vegetation is a mosaic of native woody shrubs, predominantly Kunzea serotina (kanuka, Myrtaceae) and Discaria toumatou (matagouri, Rhamnaceae), and dry grassland. Changed soil conditions appear to have made the reserve less conducive for native species, but better suited to invasion by exotic plants. Compared with detailed surveys before the dairy conversion, only 31% of the original 65 native vascular plant species were recorded in the present study and 27 new exotic species had arrived since the original survey. Soil nutrient concentrations and pH were lower in the reserve than in surrounding farmland; peaks of nitrate and ammonium were recorded at the boundary. Soil phosphate was elevated in lower-lying areas within the reserve, an effect associated with natural drainage channels and evident up to 20 m into the reserve. Four species of native megascolecid earthworms were found in the reserve but not in neighbouring pasture, whereas the diversity and abundance of beetles and spiders in the reserve was similar to that observed at least 10 m into surrounding farmland. This study highlights the importance of the soil environment in sustaining biodiversity. We conclude that this remnant retains valuable communities of native species, but is apparently being impacted by phosphate encroachment and habitat fragmentation. This does not appear to be an intractable management issue for the interface between agricultural systems and conservation sites within a dairy landscape mosaic. We suggest that attention is required to maintain buffer zones adjacent to small, isolated and vulnerable remnants of original biota that are surrounded by intensive agriculture.