Further down the track 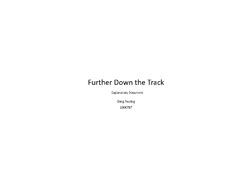 Research question: Can the restructuring of a traffic corridor in Auckland positively contribute towards resolving existing issues surrounding transport and density in the locality? Policies to allow Auckland to sprawl continue to dominate strategic planning and are, therefore, counterproductive to planning for public transport, placing people at the extremities of the city and stretching the public transport network over great distances, making it expensive and unreliable. Years of suburban sprawl have resulted in spread out communities, reliant on the private motor vehicle. Car parking takes up large sections of land at a time when the price of land is rising faster than ever before, acting as pedestrian moats surrounding malls and other amenities while people are sittng through hours of traffic, travelling further and further each day trying to balance the cost of living versus the costs of travel. This project investigates Auckland’s density and growth around the focus of the private motor vehicle and looks at the current plan to solve traffic problems, the other proposed alternatives and how these could be used to get Auckland moving again. It will look at the principles of density and transport and how they can be aligned to assist each other and how the current transport corridors of the city can be used to achieve this. The scheme looks at one of Auckland’s major transportation corridors, Dominion Road, and the effect that an upgrade to the public transport network would have. It looks at a series of locations for transport interventions to have the greatest impact on the corridor for the city. It examines, in more detail, the implementation of one of the interventions and the effect and opportunities that are created in the surrounding urban area due to this. Project site: Dominion Road, Auckland, New Zealand.