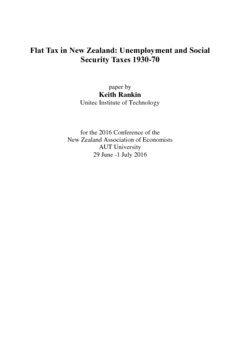 With the concept of a Universal Basic Income (UBI) being mooted this year as an important reform that can facilitate our adaption to a flexible work-world characterised by short-term contracts, inequality and automation, it becomes instructive to investigate historical precedents. In particular, unconditional income (including negative income tax) solutions are linked – at least in economists' minds – to a flatter (if not flat, ie proportional) income tax structure. The practical reconceptualisation and reform of income tax and benefits that I would argue for is indeed a proportional income tax, initially set at 33 percent, coupled with a minimum publicly-sourced personal credit set initially at $175 per week ($9,080 per year).1 Such a 'basic income flat tax' schema adapts easily to New Zealand's present tax and benefits levels, and will be affordable in the near future if not already. It would allow many people – especially young people – on benefits, student allowances or low wages to bypass the Work and Income bureaucracy and get on with their lives, leaving Work and Income to focus on addressing specific needs and deprivation, and allowing sole parents to benefit directly from Child Support agreements or impositions. In this paper I investigate the flat (sometimes 'flattish') income tax that existed, under various names, between 1930 and 1970. Initially an 'unemployment tax' (the mainstay of an Unemployment Fund), in 1936 it was repackaged as an 'employment promotion tax'. Then in 1938 it was boosted and further repackaged as a 'social security tax' (with its associated Social Security Fund). From the outset, the social security tax came to be closely associated in the public mind with the universal superannuation benefit that commenced in 1940 at a modest £10 ($20) per year. This new benefit co-existed with the means-tested age-benefit, then £78 per year. The mechanism set in the 1938 Social Security Act was that the superannuation benefit would increase by £2.5 each year until it reached the level of the age-benefit, at which point the universal superannuation would displace the age-benefit for persons over 65. However, there was no explicit provision for inflation-indexing in the legislation. Inflation had not been a problem in the 1920s and 1930s, but would become so from the 1940s and most of all in the 1950s.