Community attitudes and practices of urban residents regarding predation by pet cats on wildlife : an international comparison 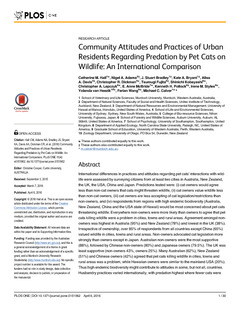 International differences in practices and attitudes regarding pet cats' interactions with wild-life were assessed by surveying citizens from at least two cities in Australia, New Zealand, the UK, the USA, China and Japan. Predictions tested were: (i) cat owners would agree less than non-cat owners that cats might threaten wildlife, (ii) cat owners value wildlife less than non-cat owners, (iii) cat owners are less accepting of cat legislation/restrictions than non-owners, and (iv) respondents from regions with high endemic biodiversity (Australia, New Zealand, China and the USA state of Hawaii) would be most concerned about pet cats threatening wildlife. Everywhere non-owners were more likely than owners to agree that pet cats killing wildlife were a problem in cities, towns and rural areas. Agreement amongst non-owners was highest in Australia (95%) and New Zealand (78%) and lowest in the UK (38%). Irrespective of ownership, over 85% of respondents from all countries except China (65%) valued wildlife in cities, towns and rural areas. Non-owners advocated cat legislation more strongly than owners except in Japan. Australian non-owners were the most supportive (88%), followed by Chinese non-owners (80%) and Japanese owners (79.5%). The UK was least supportive (non-owners 43%, owners 25%). Many Australian (62%), New Zealand (51%) and Chinese owners (42%) agreed that pet cats killing wildlife in cities, towns and rural areas was a problem, while Hawaiian owners were similar to the mainland USA (20%). Thus high endemic biodiversity might contribute to attitudes in some, but not all, countries. Husbandry practices varied internationally, with predation highest where fewer cats were confined. Although the risk of wildlife population declines caused by pet cats justifies precautionary action, campaigns based on wildlife protection are unlikely to succeed outside Australia or New Zealand. Restrictions on roaming protect wildlife and benefit cat welfare, so welfare is a better rationale.

Copyright: © 2016 Hall et al. This is an open access article distributed under the terms of the Creative Commons Attribution License, which permits unrestricted use, distribution, and reproduction in any medium, provided the original author and source are credited.