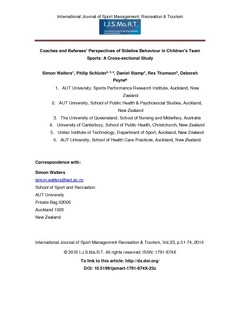 This study arose from media and sporting organisations’ concerns in New Zealand about the sideline behaviour of adults at children’s team sporting events. The aim of the study was to measure and elicit the perspectives of coaches and referees of adult behaviour at children’s games. The descriptive cross-sectional study utilised an electronic survey of coaches and referees of organised children’s sport (ages 6-11 years) in a large metropolitan region of New Zealand. The survey contained both closed and open-ended questions drawing upon quantitative and qualitative analytical techniques. The findings indicated significant differences in perception of sideline behaviour between referees and coaches; and between male and female participants. The majority of respondents expressed concern about sideline behaviour. Due to the paucity of research exploring referees’ perspectives of organised children’s sport, we recommend that future studies of sideline behaviour also consider the value of referees’ perspectives. We also suggest that future studies examine the potential influence of gender as a moderator of sideline behaviour.