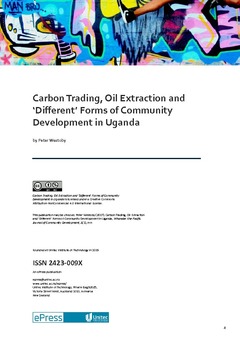 Originally presented at the ACDA–IACD Conference, February 2017. In reflecting upon the work my colleague Dr Kristen Lyons and I have been doing in Uganda for a number of years, there are two case studies that, when considered with a social science, community development and political ecology lens, have relevance beyond the Ugandan context. This paper also draws substantially from a series of co-authored pieces Dr Lyons and I have written together, accessible from various sources. I approach these case studies as a social scientist, using them to question what the particular role is of social science in the world of community development theory and practice. Some of my thoughts are that, firstly, social science should play a role in understanding how the ‘powerful’ work materially and discursively to undermine or marginalise the poor – and this role should enable practitioners or advocates to theorise and strategise more carefully. The first case study unpacks this social science role in relation to Green Resources, the largest industrial forestry multinational working in Africa. Secondly, social science should enable scholars and practitioners to observe and learn from the poor as to how they organise themselves. This learning should enable practitioners–professionals to know more about how to accompany citizens in social change work, and is the learning that is unpacked in the second case study, on the National Association of Professional Environmentalists (NAPE). Thirdly, social science, as per Mills’ The Sociological Imagination (1959), should enable practitioners to regain their imaginative potentials (the equivalent of Freire’s ‘imaginative literacy’) to change the world, and to not be limited by what is easily observed and sold to us. I come to this work through the lens of community development (CD) theory and practice. While arguing for critical scholarship, it is important to situate my own views on community development. Some authors argue for ‘true’ or ‘authentic’ community development with a clear definition (Bhattacharyya, 2004). This is also the current position of the International Association of Community Development (IACD), which defines CD as “a practice-based profession and an academic discipline concerned with the organisation, education and empowerment of people within their communities” (IACD, 2017, para. 1). However, within these case studies, I instead prefer to focus on how community development is discursively and materially deployed in practice. At no point do I argue that any actor, in this case Green Resources or the National Association of Professional Environmentalists, is not doing ‘authentic community development’, even though I subject them to critical analysis. Instead, I approach analysis of how community development is deployed through the analytical lens of traditions or models. By traditions or models I refer, firstly, to the literature on divergent traditions of community development, such as social guidance, social mobilisation and social learning; or Freirean, Gandhian, and Alinskian approaches (see Campfens, 1997; Westoby & Simpson-Hope, 2011), each reflecting particular intellectual roots and practice norms; and, secondly, diverse models, commonly known within the community development literature as consensus, liberal/pluralist and radical models (Gilchrist, 2004). Recognising such traditions and models then ensures that the practices of an official corporate community development approach can be ‘evaluated’ alongside some established orthodoxies of normative community development theory and practice. For example, the social learning tradition has established norms around popular education and Freire’s contribution to critical learning. Finally, I frame my work conceptually through political ecology. Political ecology as a framework aims “to understand the complex relations between nature and society through a careful analysis of what one might call the forms of access and control over resources and their implications for environmental health and sustainable livelihoods” (Watts, 2000, p. 257). This definition emphasises the application of the political ecology framework to explain conflicts around common resources (Robbins, 2012). This power struggle over resources at the local level often results in both political and economic marginalisation of the vulnerable, namely peasants. My work in Uganda is understood via this political ecology theoretical orientation. With these three settings in mind let us turn to the two key case studies, which shape the findings and arguments of my paper: the first, Green Resources; and the second, National Association of Professional Environmentalists.