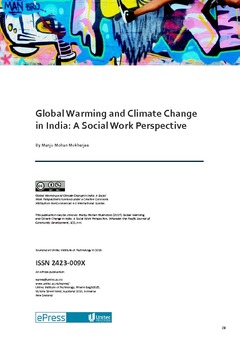 Earth provides enough to satisfy every man’s needs, but not every man’s greed. (Mahatma Gandhi) India has ratified the Paris agreement in terms of its scope and impact, and it is probably the most far-reaching international agreement for the protection of the environment. India needs to make every effort in terms of economic sustainability for climate change and its objectives in future. This shift is already underway. Bringing in greater efficiency in the way energy is produced and consumed is crucial to fulfilling one of India’s main commitments. The country seeks solutions to interrelated problems and research has to play a central role in the implementation of the 2030 agenda for social change (RIS 2016). Global warming and climate change According to the U.S. Environmental Protection Agency, the term climate change is often used interchangeably with the term global warming, but according to the National Academy of Sciences, the phrase ‘climate change’ is growing in preferred use to ‘global warming’ because it helps convey that there are other changes in addition to rising temperatures. Climate change refers to any significant change in measures of climate (such as temperature, precipitation, or wind) lasting for an extended period.

Global Warming and Climate Change in India: A Social Work Perspective is licensed under a Creative Commons Attribution-NonCommercial 4.0 International License.