Report on biosecurity advocacy on ferries in the Hauraki Gulf, Jan/Feb 2015 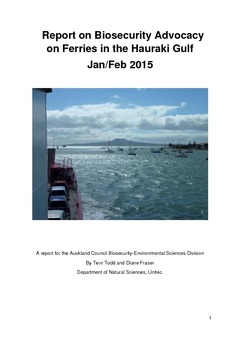 The Hauraki Gulf marine park is one of New Zealand’s national treasures. It brings many aesthetic,environmental,social and economic values to the Auckland Region and New Zealand.The Hauraki Gulf Marine Park has been the fruition of many years work by the Auckland Council and Department of Conservation collaborating in the Treasure Islands initiative. . Considerable ongoing effort is been made to create as many of these islands as possible as 'Pest-free' habitats for New Zealand endangered native species ( Auckland Council, Department of Conservation & Hauraki Gulf Marine Park, 2015) . However, as most of these islands can be accessed freely by private vessels and public ferries, maintaining this pest -free status and the high standard of values of the Hauraki Gulf Islands is difficult due to the high risk of introduction or re-introduction of a range of invasive species (Auckland Council, Department of Conservation & Hauraki Gulf Marine Park, 2015) . The Treasure Islands initiative is a mechanism for education of the public about the value of the islands of the Hauraki Gulf as well as providing information and actions as to how the public can contribute to this cause by checking for stowaways and, therefore, reducing the risk of transport of invasive species to islands. As such, the effectiveness of the communication in the Treasure Islands advocacy role is essential for the success of this initiative to allow the dissemination of knowledge to the public in a manner that will stimulate a change in their behaviour by checking for pest species before travelling to the islands. In a study by Tyrell (2012), it would appear that public awareness of biosecurity risks and knowledge of preventative actions had risen in Auckland residents since the previous survey in 2009/2010. It was suggested in this study that this increase in awareness was due to the advocacy efforts implemented under the Treasure Islands campaign. Therefore, the need to continue this advocacy role is vital for the future protection of the islands of the Hauraki Gulf Marine Park as well as public awareness of the collaboration and conservation initiatives of Auckland Council and the Department of Conservation.