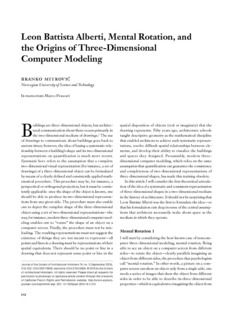 Mitrovic, B. (2015). Leon Battista Alberti, Mental Rotation and the Origins of Three-Dimensional Computer Modeling. Journal of the Society of Architectural Historians, 73, pp.210-220.

© 2015 by the Society of Architectural Historians. All rights reserved.