A foreign flower no more : Tongan diasporic media and the 2014 Tongan election 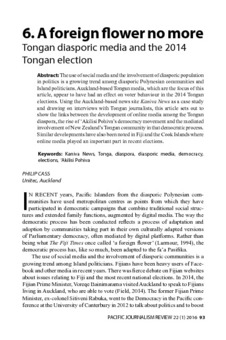 The use of social media and the involvement of diasporic population in politics is a growing trend among diasporic Polynesian communities and Island politicians. Auckland-based Tongan media, which are the focus of this article, appear to have had an effect on voter behaviour in the 2014 Tongan elections. Using the Auckland-based news site Kaniva News as a case study and drawing on interviews with Tongan journalists, this article sets out to show the links between the development of online media among the Tongan diaspora, the rise of ‘Akilisi Pohiva’s democracy movement and the mediated involvement of New Zealand’s Tongan community in that democratic process. Similar developments have also been noted in Fiji and the Cook Islands where online media played an important part in recent elections.

160606 Government and Politics of Asia and the Pacific, 200102 Communication Technology and Digital Media Studies