Native and Invasive : the changing fate of the spur-winged plover (Vanellus miles novaehollandiae) in New Zealand. 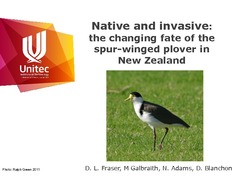 Study Aims: • Describe the pattern of spread across New Zealand • Identify possible factors associated with the spread • Relate this to the spread of invasive species Abstract from 2014 conference programme: "The southern Australian sub-species of masked lapwing (Vanellus miles novaehollandiae) self-introduced to New Zealand as early as 1886. However, the first breeding pair was recorded in the Invercargill area of South Island in the 1932. Known as the spur-winged plover in New Zealand, it is classified as 'native', due to its establishment prior to the introduction of the Wildlife Act 1953 and was provided full protection. Over the last 90 years the spur-winged plover has established and spread rapidly across the whole of New Zealand. The impact of the spread of this species, particularly as an aviation air-strike risk, has resulted in a reclassification of this bird onto Schedule 5 of the wildlife Act with all protection status being removed. The range expansion and characteristics of this species were assessed in relation to known characteristics of invasive species. Range expansion was determined using presence or absence data on a country wide grid compiled from national surveys conducted from 1930 to 2004. The pattern of range expansion was well described by a logistic regression model. The pattern of expansion after initial establishment showed a lag followed by exponential growth phase consistent with many other invasive species. As with other successfully established invasive species, abiotic and biotic factors such as climate suitability, proximity to a novel vacant niche, propagule pressure and life history characteristics have apparently contributed to the successful establishment and spread of V. m. novaehollandea in New Zealand. "