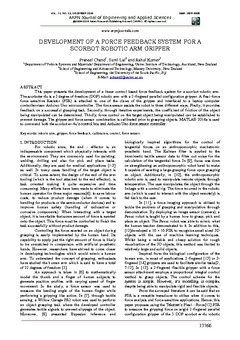 This paper presents the development of a linear control based force feedback system for a scorbot robotic arm. The scorboter-4u is a 5 degree of freedom (DOF) robotic arm with a 2-fingered parallel configuration gripper. A flexi-force force sensitive Resistor (FSR) is attached to one of the claws of the gripper and interfaced to a laptop computer controllerviaan Arduino Uno microcontroller. The force sensor assists the robot in three different ways. Firstly, it provides feedback on a successful grasping task. Secondly, through iterative experiments, the coefficient of friction of the object being manipulated can be determined. Thirdly, force control on the target object being manipulated can be established to prevent damage. The gripper and force sensor combination is calibrated prior to grasping objects. MATLAB 2014a is used to command both the scorbot er-4u’s control box and Arduino Uno force sensor controller.