The historical development of Vietnam National University, Hanoi from a Bourdieusian perspective 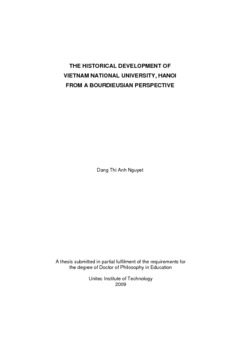 Nguyet, D.T.A. (2009). The historical development of Vietnam National University, Hanoi from a Bourdieusian perspective. An unpublished thesis submitted in partial fulfilment of the requirements for the degree of Doctor of Philosophy in Education, Unitec Institute of Technology, New Zealand.

This study into the historical development of a specific university, Vietnam National University, Hanoi (VNU-Hanoi), aimed to produce insights into and theorise the development of this institution of higher education. In terms of the theorisation, I adopted Bourdieu’s three constructs of capital, field and habitus, and his themes on French universities. This was because these constructs had explanatory strength into development processes, and the themes on French universities offered an interpretation window into the development of VNU-Hanoi as a university. Through a single, qualitative historical and contemporary study design that utilised archives and interviews as the main data sources, the study drew rich, in-depth data on the development of VNU-Hanoi. These data were then analysed and synthesised using Bourdieu’s theories. Key findings in this study were that VNU-Hanoi experienced two major phases of change in its history. The first phase from the 1950s to the 1970s observed the early formation of VNU-Hanoi with the establishment of its three founding institutions: Hanoi University, Hanoi University of Education and Hanoi University of Foreign Language Education. VNU-Hanoi’s development in this phase reflected the conditions and changes in the politics and the role of intellectuals in the North of Vietnam. In the second phase of change from the 1980s, VNU-Hanoi as a field moved towards autonomy. There were changes in the university’s relations with the Communist Régime and the economy, and a consolidation of the power relations and the way of working inside the university. The development of VNU-Hanoi resulted from academics’ interactions inside the university and the interactions between the university and the Communist Régime. This development showed that Bourdieusian field, habitus and capital and his themes on French universities illuminated the development process of a university. As well, the case of VNU-Hanoi demonstrated that these constructs shifted and were contested in varying political and economic contexts. The case furthered Bourdieu’s construct of social fields in terms of the shaping influence of fields of power and economy. It showed that incorporation and transformation of this influence was the key for a social field to exist and develop. The case also contributed to Bourdieu’s themes on university development as a field and the role of academics in this process. This research into the historical development of Vietnam National University, Hanoi was funded by New Zealand's International Aid & Development Agencyas part of my development scholarship.