Plan now, by planning for the future : rebuilding a city by activating its stadium 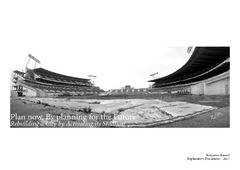 Russell, B. (2017). Plan now, by planning for the future : rebuilding a city by activating its stadium. An unpublished research project presented in partial fulfillment of the requirements for the degree of Master of Architecture (Professional). Unitec Institute of Technology, New Zealand.

The transformation from ancient stadium construction to the 21st century stadium experience has turned sports arenas into a global media spectacle. Stadiums are where extraordinary events take place, they allow sporting history to be witnessed. They were colossal man-made structures that played host to blood covered gladiator fights and to global Olympic events hosting the worlds most gifted male and female athletes for over 2,500 years. Each stadium was designed to effectively respond to history, namely the history of a city and its sporting legacy. Stadium typology has transformed over the years, from the first Greek Olympia to the 2016 Rio Olympics, and the construction of stadiums has undergone required adaption to transform the structures for the urban cityscape of the future. Multi-purpose urban entertainment centres are the future of stadium design. Christchurch had its main sporting stadium damaged in the 2011 earthquake. A new multi-purpose stadium is planned for the near future, as part of the city’s master plan – The Blue Print. The Blue Print incorporates significant anchor projects including a multi-purpose stadium. A key driver for The Blue Print was to make the city accessible and walkable. This project explores the impact of a proposed multi-purpose stadium in a city’s centre as a multi-purpose sporting and entertainment ‘hub’, transforming the concept of the old classical one-dimensional stadium to a new adaptable, flexible, and utilisable stadium. The project will look at a master-planning exploration, incorporating the local environment and the proposed Blue Print design for the future. The project will also include an exploration of a multi-purpose stadium which includes a ‘mixed-use-hub’ as a key design feature. With the stadium as the anchor for this proposal, key transportation projects and explorations are needed to make a modern inner-city stadium viable from an economic, environmental and social perspective. This exploration will push and test the design guidelines of how New Zealand stadiums have been historically designed and transform the legacy of the stadium’s future through its site context and functionality