Is there a housing crisis in New Zealand or is it only a metaphor? Results of a critical metaphor analysis 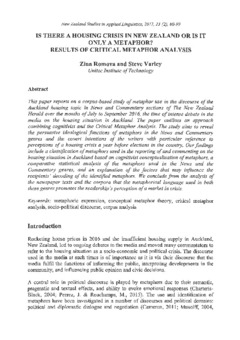 This paper reports on a corpus-based study of metaphor use in the discourse of the Auckland housing topic in News and Commentary sections of The New Zealand Herald over the months of July to September 2016, the time of intense debate in the media on the housing situation in Auckland. The paper outlines an approach combining cognitivist and the Critical Metaphor Analysis. The study aims to reveal the persuasive ideological functions of metaphors in the News and Commentary genres and the covert intentions of the writers with particular reference to perceptions of a housing crisis a year before elections in the country. Our findings include a classification of metaphors used in the reporting of and commenting on the housing situation in Auckland based on cognitivist conceptualisation of metaphors, a comparative statistical analysis of the metaphors used in the News and the Commentary genres, and an explanation of the factors that may influence the recipients' decoding of the identified metaphors. We conclude from the analysis of the newspaper texts and the corpora that the metaphorical language used in both these genres promotes the readership's perception of a market in crisis.