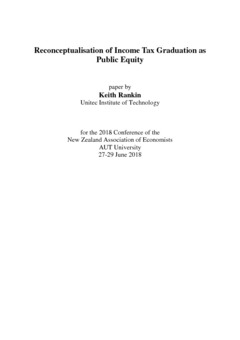 A 'Universal Basic Income' in 2016 became a genuine policy option for a major political party (Labour) in New Zealand. It is thus a concept – like negative income tax – that requires more public understanding. In particular, something close to a Universal Basic Income can be created, in New Zealand, as a pure accounting exercise. The argument here is that the Universal Basic Income – described in 1991 as a "universal tax credit" coupled with a "moderately high flat tax" – need not be the radical change to the fiscal state that it is frequently painted as, by both proponents and opponents. The approach adopted has been called 'Basic Income Flat Tax', as distinct from the prevailing 'Conditional Income Graduated Tax' conceptualisation of the tax-transfer interface. The suggested reconceptualisation of income tax considers an additional share of GDP to be included as public revenue, by regarding existing income-tax graduations as 'public equity benefits'. This exercise in fiscal arithmetic shows that – by grouping Public Equity Benefits, Work and Income Benefits, Family Tax Credits and Student Allowances all as alternative forms of publicly-sourced private income – New Zealand and other similar countries already have something close to universal personal tax credits. A reformulation of the May 2017 Budget summary projections contrasts alternative approaches to determining gross public revenue. 'Public equity benefits' may be seen as a conceptual precursor to 'public equity dividends', which represent an affordable Universal Basic Income with constructive labour market incentives