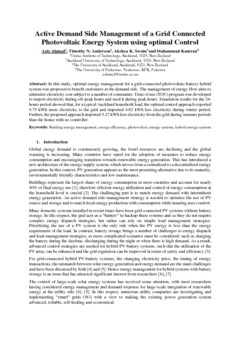 In this study, optimal energy management for a grid-connected photovoltaic-battery hybrid system was proposed to benefit customers at the demand side. The management of energy flow aims to minimize electricity cost subject to a number of constraints. Time of use (TOU) program was developed to import electricity during off-peak hours and used it during peak hours. Simulation results for the 24- hours period showed that, for a typical Auckland household load, the optimal control approach exported 9.75 kWh more electricity to the grid and imported 4.62 kWh less electricity during winter period. Further, the proposed approach imported 5.27 kWh less electricity from the grid during summer periods than the house with no controller.