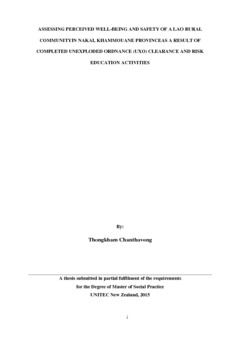 Chanthavong, T. (2015). Assessing perceived well-being and safety of a Lao rural community in Nakai, Khammouane province as a result of completed unexploded ordnance (UXO) clearance and risk education activities. A thesis submitted in partial fulfilment of the requirements for the Degree of Master of Social Practice UNITEC New Zealand, 2015.

RESEARCH QUESTIONS: 1. What are the significant changes as a consequence of the UXO operational intervention in Nakai in relation to the well-being and safety of residents and social, economic, and developmental conditions before the risk education and UXO clearance? 2. What was the effect on the well-being and safety of residents and social, economic, and developmental conditions as a result of risk education and UXO clearance? 3. How could the process of the risk education and UXO clearance have been improved for other villages in the future? Unexploded Ordnances (UXO) left over from the Second Indochina War (SIW) between 1964 and 1973 still haunt the lives of those in affected communities by restricting access to agricultural land, and impeding the socio-economic and basic developmental status of the countries affected including Laos. However, in the last two decades, cooperation among governments and their development partners both locally and internationally to tackle the UXO issues has seen the decline in UXO casualties and improvements in a number of ways. This study endeavours to assess the perceived well-being and safety of a Lao rural community in a village in Nakai district, Khammouane province, following a completed Unexploded Ordnance clearance and risk education activities. Through exploring the livelihoods and current living conditions of the villagers, the study sought to find out whether the UXO operations carried out by commercial operators about five years ago have made significant changes. The field study was carried out in Laos from mid June to mid July 2014. A qualitative approach was used in this research study and semi-structured interviews were employed for the primary data collection with 11 voluntary participants. The data obtained were analysed through the use of thematic analysis. The research findings of this study revealed that UXO operations conducted by commercial operators have had great impact on the respondents‘ general well-being and safety. Essentially, the research showed that respondents could access agricultural land without the fear of hitting UXO. As a result, they have had safe land for generating farming products including rice, vegetables, and cash crops on which they rely. Moreover, UXO operations have produced pathways for a number of fundamental infrastructure systems to be established including the construction of road, a school, a healthcare centre, and a water supply system. Together, these components contribute to improving the living standards of the villagers The findings revealed that since the introduction of the UXO operations, there have not been any UXO-related accidents, neither in the village nor in the entire community of 17 villages in Nakai Plateau. However, the findings also revealed that a minority of the research respondents still come across some UXOs on the post-cleared land and they still appear to have touched and moved the UXOs found. These incidents suggest that the UXO operations including clearance and risk education (RE) carried out by the commercial companies needs to be improved and assessed by concerned organisations.