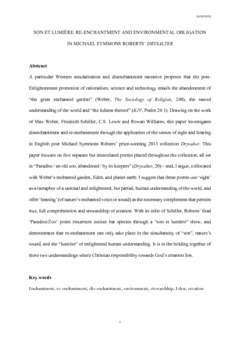 A particular Western secularisation and disenchantment narrative proposes that the post Enlightenment promotion of rationalism, science and technology entails the abandonment of “the great enchanted garden” (Weber, The Sociology of Religion, 240), the sacred understanding of the world and “the fulness thereof” (KJV, Psalm 24:1). Drawing on the work of Max Weber, Friedrich Schiller, C.S. Lewis and Rowan Williams, this paper investigates disenchantment and re-enchantment through the application of the senses of sight and hearing in English poet Michael Symmons Roberts’ prize-winning 2013 collection Drysalter. This paper focuses on five separate but interrelated poems placed throughout the collection, all set in “Paradise / an old zoo, abandoned / by its keepers” (Drysalter, 20)—and, I argue, collocated with Weber’s enchanted garden, Eden, and planet earth. I suggest that these poems use ‘sight’ as a metaphor of a rational and enlightened, but partial, human understanding of the world, and offer ‘hearing’ (of nature’s enchanted voice or sound) as the necessary complement that permits true, full comprehension and stewardship of creation. With its echo of Schiller, Roberts’ final ‘Paradise/Zoo’ poem resurrects extinct bat species through a “son et lumière” show, and demonstrates that re-enchantment can only take place in the simultaneity of “son”, nature’s sound, and the “lumière” of enlightened human understanding. It is in the holding together of these two understandings where Christian responsibility towards God’s creation lies.

2299 Other Philosophy and Religious Studies