Into the ice : exploring an architectural identity in Antarctica 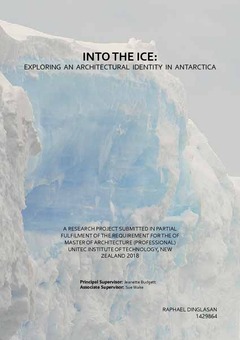 Dinglasan, R. (2018). Into the ice: Exploring an architectural identity in Antarctica. An unpublished research project submitted in partial fulfilment of the requirement for the degree of Master of Architecture (Professional), Unitec Institute of Technology, Auckland, New Zealand.

RESEARCH QUESTION: How might Antarctica’s natural environment define a possible contemporary architectural identity? This research project seeks to discover the possible architectural identity of Antarctica; a continent where no indigenous population had been established. With its isolation and extreme climate, it is known to have one of the most inhospitable environments on earth. Antarctica’s untainted and untouched nature is a setting that humans have not been able to conquer; with this comes its distinctive qualities. It is safe to say that its identity lies within its harsh climate and natural environment. Much of the built environment consists of an assembly of huts and sheds that appear visually out of context. Scientists and support crews must spend months confined in research stations, which have been designed based purely on the functional engineer’s approach. Without the consideration of the occupant’s needs, these buildings have resulted in devastating effects on physical health and psychological well-being. Organisations like the Antarctic Biennale and Ice Lab have invited artists and architects to explore a universal cultural future in Antarctica. While the existing research stations are able to respond to the functional challenges of the frozen continent, could these buildings benefit from following a design process driven by Antarctica’s natural environment? Extensive research into the nature of the continent will inform the design, alongside precedent studies and current theoretical research. The project proposes to explore this idea through a redesign of New Zealand’s Antarctic research station, Scott Base.