Auckland 2017-2018 : a year in the life of an international student from Beijing 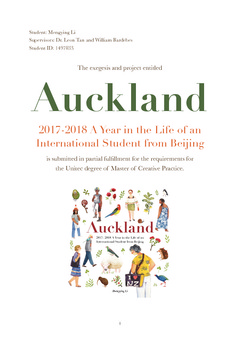 Li, M. (2019) Auckland 2017-2018: A year in the life of an international student from Beijing (Unpublished document submitted in partial fulfilment of the requirements for the degree of Master of Creative Practice). Unitec Institute of Technology, Auckland, New Zealand. Retrieved from https://hdl.handle.net/10652/4703

RESEARCH QUESTION: How can illustration visually communicate an experience of living in a different culture in Auckland, New Zealand (NZ)? ABSTRACT: New Zealand is one of the most beautiful island countries in the South Pacific; it is a former British colony and so is considered a “westernised” society. Auckland is NZ’s largest city, and is the most diverse and multicultural in the country. China is one of the largest countries in Asia, and is my homeland. With 55 minorities, China is a multiethnic country. Beijing is the capital of China, and it is one of the most densely populated cities, and in recent times, it is becoming increasingly multiethnic and multicultural. In the globalized world, different forms of art, culture and social life are increasingly accessible whether through travel or through the Internet. The coexistence of multiple cultures makes the world more meaningful and also more diverse, and as more groups express themselves in a shared society, issues like prejudice or stereotype can arise. In my personal opinion, stereotypes or prejudices are caused by people who reject or have no chance to understand other cultures. On the other hand, when people travel or migrate to a different country, they are exposed to cultural differences in a way that demands understanding and adaptation; experience of difference plays an important role in cultural acceptance. Stereotypes and prejudices can be challenged or undone if people step out of their cultural “bubbles” more to experience and communicate across cultures. "What is the use of the arts in the actual globalised world? One may begin answering this by pointing out that in the Greek world, in antiquity, the arts occupied a very special place and were defined as the manifestation of beauty. Thus, art had its own function, to serve the aesthetic aspect of society. To the Greeks, art corresponded to metaphysics and its role was to beautify, improve the life of society, and thus they lived. Oliveira and Silva (2011, p. 471)" [Oliveira, J. A. & Silva, A. J. (2011). Arts, Culture and Science and Their Relationships. Syst Pract Action Res. 24, 565–574 . doi: 10.1007/s11213-011-9209-5] More and more people have begun to use illustration as a tool to express a spiritual dimension to their lives today. Illustrations are a form of visual communication that does not depend on words; it can engage audiences and communicate experiences of cultural difference (to a degree) regardless of language. This book communicates a highly personal experience of intercultural exploration, expressed as a unique combination of image and text. It invites the audience to experience life through my psyche, to see New Zealand through the eyes of an illustrator who has come from China. My hope is that this project contributes to an increased understanding of the role illustration can play in making sense of crosscultural encounters and cultural difference in a globalized world.