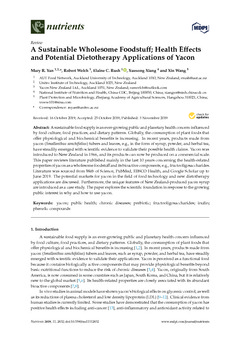 A sustainable food supply is an ever-growing public and planetary health concern influenced by food culture, food practices, and dietary patterns. Globally, the consumption of plant foods that offer physiological and biochemical benefits is increasing. In recent years, products made from yacon (Smallanthus sonchifolius) tubers and leaves, e.g., in the form of syrup, powder, and herbal tea, have steadily emerged with scientific evidence to validate their possible health claims. Yacon was introduced to New Zealand in 1966, and its products can now be produced on a commercial scale. This paper reviews literature published mainly in the last 10 years concerning the health-related properties of yacon as a wholesome foodstuff and its bioactive components, e.g., fructooligosaccharides. Literature was sourced from Web of Science, PubMed, EBSCO Health, and Google Scholar up to June 2019. The potential markets for yacon in the field of food technology and new dietotherapy applications are discussed. Furthermore, the unique features of New Zealand-produced yacon syrup are introduced as a case study. The paper explores the scientific foundation in response to the growing public interest in why and how to use yacon.

This article is an open access article distributed under the terms and conditions of the Creative Commons Attribution (CC BY) license (http://creativecommons.org/licenses/by/4.0/).