Waking a “Sleep City”: developing an urban complex in a commuter town in Beijing 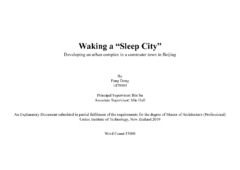 Dong, F. (2019). Waking a ‘Sleep City’: developing an urban complex in a commuter town in Beijing. (Unpublished document submitted in partial fulfilment of the requirements for the degree of Master of Architecture (Professional)). Unitec Institute of Technology, Auckland, New Zealand. Retrieved from https://hdl.handle.net/10652/4859

RESEARCH QUESTION: How can a town with a lack of functions and limited space be reformed? ABSTRACT: With the rapid development of Beijing’s economy, more and more people have been attracted to the city in the past two decades. In order to settle the huge numbers of people moving to the city, the government has constructed numerous commuter towns on the outskirts of Beijing. However, the residents of the commuter towns typically have a poor quality of life because of the long commute time and lack of local public service facilities. The main function of the commuter towns is for sleeping, which is why locally they are called “Sleep Cities.” Moreover, there is not much developable land left to build on. The urban complex, as a special urban phenomenon, is a concentrated presentation of urban intensive, organic, and vertical development trends. By examining the origin and development of the urban complex concept and the evolution of mixed-use development, it can be shown that an urban complex might solve some of the problems that exist in commuter towns like those in Beijing. This project takes the Huilongguan Community, one of the largest commuter towns in Beijing, as a research subject. By analysing the current situation of the site, as well as learnings from literature reviews and successful precedents around the world, a possible design solution is identified. Based on data and analysis, the design introduces an urban complex at one traffic node to optimise traffic transit and provide plenty of diverse public service facilities. The project makes up for the lack of public resources and seeks to create more jobs and to enhance the vitality of the commuter town. This research definitively answers the question, “How can a town with a lack of functions and limited space be reformed?” It also identifies the values of urban complexes. If such urban complexes are promoted, it may improve the quality of life of the residents living in the commuter towns and make society more harmonious and stable.