Experiences of narcissistic abuse : an exploration of the effects on women who have had a long term, intimate, relationship with a suspected narcissistic male partner 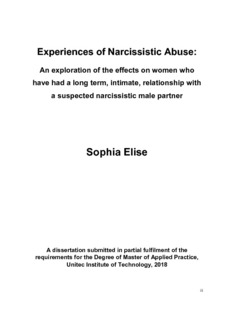 Elise, S. (2018). Experiences of narcissistic abuse : an exploration of the effects on women who have had a long term, intimate, relationship with a suspected narcissistic male partner. (Unpublished document submitted in partial fulfilment of the requirements for the degree of Master of Applied Practice). Unitec Institute of Technology. Retrieved from https://hdl.handle.net/10652/4929

This research explores how women are affected by a long term, intimate relationship with a suspected narcissistic male partner. There has been very little empirical research, other than case studies, into women’s experiences in this area, and I have not located any similar research within the New Zealand cultural context. Practitioner research methodology was used to gain an in-depth understanding of women’s experiences with a view to improving my therapeutic counselling practice. Six women, whose ex-partners (from long-term relationships) were judged to have met specific criteria for Narcissistic Personality Disorder, were interviewed using a semi-structured interview method. The enquiry focused on their experiences at three stages of the relationship (beginning, during and post) and how they were affected. Transcripts were then analysed using thematic analysis which showed women were subjected to ongoing and repeated physical and psychological aggression, coercion, social isolation and financial exploitation throughout their relationship. They lost their independence and agency, and the relationships had a significantly detrimental effect on them in most areas of their lives, i.e. mentally, physically, socially, sexually, spiritually and financially. This abuse was insidious, and the women lived in fear for their safety and the safety of their children. The research shows that the deterioration of these relationships happens gradually, it ultimately erodes and annihilates the sense of self, which makes it almost impossible to leave. The negative effects on the women were immense and continued long after the relationships had ended. Despite what they endured, they showed enormous strength, courage and resiliency. Recovery was a long process, often self-directed, including seeking help from counsellors. Implications from the findings are discussed, and it is concluded that the experience of living longterm with a partner with strong narcissistic behaviours produces some outcomes of domestic abuse that may not be typical for other victims of domestic abuse. I discuss how these women become annihilated and trapped in these relationships and make recommendations on how response-based therapy and narrative therapy could be used to help these women rebuild their lives and sense of self.