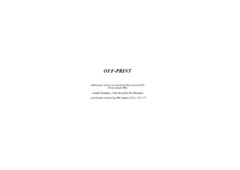 [OFF-PRINT] Usnea dasaea is reported for the first time from New Zealand. Corticolous specimens of Usnea collected in Northland and Tasman in 2004 could not be identified at the time using the key and descriptions in the first edition of the New Zealand lichen Flora (Galloway 1985). Thin-layer chromatography revealed the presence of salazinic, norstictic and galbinic acids, which did not match species then recognized in New Zealand. Reading the description of Australian Usnea species in Stevens (1999), it seemed possible that the specimens were U. undulata Stirt. although U. undulata was not recorded in New Zealand until the second edition of the Flora for saxicolous material (Galloway 2007), and Clerc & Herrera-Campos (1997) considered U. undulata to be a synonym of U. dasaea Stirt. Clerc (2004) later identified a specimen of U. dasaea from Australia, which suggested the species could also be present in NewZealand. Morphological and chemical examination of a wider range of specimens from the North Island and comparison with descriptions of U. dasaea confirm the presence of the species in New Zealand.