Types and other historical specimens of Allan and Richard Cunningham's taxa of Epilobium and Fuchsia (Onagraceae) from New Zealand in the Turczaninow Herbarium at the National Herbarium of Ukraine (KW). 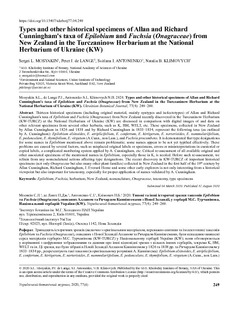 Thirteen historical specimens (including original material, mainly syntypes and isolectotypes) of Allan and Richard Cunningham's taxa of Epilobium and Fuchsia (Onagraceae) from New Zealand recently discovered in the Turczaninow Herbarium (KW-TURCZ) at the National Herbarium of Ukraine (KW) are discussed in comparison with digital images of and data on other relevant specimens from several other herbaria, such as K, BM, WELT, etc. These specimens, collected in New Zealand by Allan Cunningham in 1826 and 1838 and by Richard Cunningham in 1833–1834, represent the following taxa (as outlined by A. Cunningham): Epilobium alsinoides, E. atriplicifolium, E. confertum, E. hirtigerum, E. nerterioides, E. nummulariifolium, E. pedunculare, E. thymifolium, E. virgatum (A.Cunn., non Lam.), and Fuchsia procumbens. It is demonstrated that type designations for some names in Epilobium mentioned above remain problematic; some names appear to be not yet typified effectively. These problems are caused by several factors, such as misplaced original labels or specimens, errors or misinterpretations in curatorial or copied labels, a complicated numbering system applied by A. Cunningham, etc. Critical re-assessment of all available original and other associated specimens of the mentioned names in Epilobium, especially those in K, is needed. Before such re-assessment, we refrain from any nomenclatural actions affecting type designations. The recent discovery in KW-TURCZ of important historical specimens (not only Onagraceae but also many other plant families) collected in New Zealand in the first half of the 19th century by Allan Cunningham, Richard Cunningham, J. Everard Home and some other early explorers is not only interesting from a historical viewpoint but also important for taxonomy, especially for proper application of names validated by A. Cunningham

This is an open access article under the terms of the Creative Commons Attribution License (http://creativecommons.org/licenses/by/4.0/), which permits use, distribution, and reproduction in any medium, provided the original work is properly cited