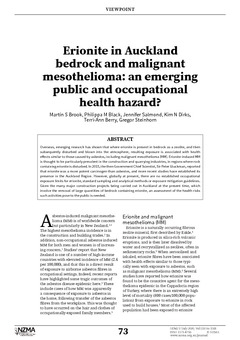 Overseas, emerging research has shown that where erionite is present in bedrock as a zeolite, and then subsequently disturbed and blown into the atmosphere, resulting exposure is associated with health effects similar to those caused by asbestos, including malignant mesothelioma (MM). Erionite-induced MM is thought to be particularly prevalent in the construction and quarrying industries, in regions where rock containing erionite is disturbed. In 2015, the then Government Chief Scientist, Sir Peter Gluckman, reported that erionite was a more potent carcinogen than asbestos, and more recent studies have established its presence in the Auckland Region. However, globally at present, there are no established occupational exposure limits for erionite, standard sampling and analytical methods or exposure mitigation guidelines. Given the many major construction projects being carried out in Auckland at the present time, which involve the removal of large quantities of bedrock containing erionite, an assessment of the health risks such activities pose to the public is needed.