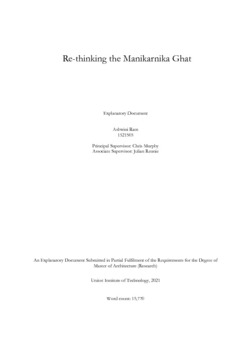 Ram, A. (2021). Re-thinking the Manikarnika Ghat. (Unpublished document submitted in partial fulfilment of the requirements for the degree of Master of Architecture (Professional)). Unitec Institute of Technology, New Zealand. Retrieved from https://hdl.handle.net/10652/5385

RESEARCH QUESTION: How can an architectural solution enhance the human experience of mourners in the context of the commemoration of death at Manikarnika Ghat in Varanasi? ABSTRACT: “Benares is older than history, older than tradition, older even than legend, and looks twice as old as all of them put together.” - Mark Twain For Hindus, Varanasi (also known as Benares or Kashi) is considered a sacred place for cremations. Over the ages, cremations at Varanasi have been carried out in open-air wooden pyres, where the body is burned using wood. These open-air cremations occur on the stepped platforms constructed all along the banks of the sacred River Ganges, which flows through Varanasi. Such places are referred to locally as “Ghats”. The Manikarnika Ghat is the oldest and most famous of these Ghats. However, increasingly, the practice of open-air cremation is causing many issues, predominantly concerning pollution, lack of hygiene, overcrowding, and congestion. This research endeavours to remodel the Manikarnika Ghat into a modern crematorium whilst preserving the traditional practices associated with death at this site. Modern crematoria the world over operate indoor electric furnaces where the bodies are incinerated. However, in this author's view, a straight adoption of this modern approach would not be appropriate in the context of Varanasi. Instead, this research adopts the three lenses of Issues and Problems, Religious Beliefs, and Traditions and Practices to develop a solution. To identify an appropriate architectural response, a literature review of key research and precedent studies of national and international crematoria, along with an in-depth analysis of site and context were undertaken. Based on the resulting research design strategy, this study proposes a cluster of built spaces and infrastructure supporting traditional open-air cremations, an indoor electric crematorium, and other services at Manikarnika Ghat. Responding to the environmental concerns yet preserving the traditions and spirit of the Ghats, this study seeks to keep the mourners’ experience as the central focus