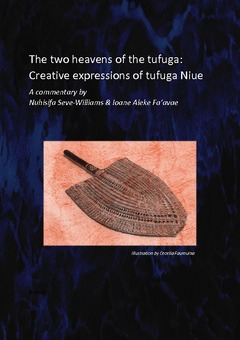 TAGATA NIUE Tagata Niue are not a homogeneous group. Rather there are two main groupings – tagata Niue in the diaspora that reside in New Zealand and Australia - the largest group are resident in New Zealand; and tagata Niue that live on the island of Niue. While these groups share some similarities, there are distinct differences between the groups in terms of worldviews. Although a wider discussion of the groups are outside the scope of this paper it is important to recognise that the diaspora tagata Niue in particular the multi-ethnic New Zealand born tagata Niue are likely to understand and view arts from a western perspective. Despite this there is merit in understanding how tagata Niue historically represented their world in the tangible creative expressions that we see today. TUFUGA NIUE Oral traditions say that all tufuga (knowledge holders and skilled practitioners) of Niue originated from the goddess Hina who lived in Lagi-tua-ua (second heaven) with her children. Hina is an offspring of Huanaki who was one of two tupua (deities) who completed the island of Nukututaha (Niue). The children of Huanaki lived in three places – Fonuagalo (the underworld or deep ocean); Lagi-tua-taha (first heaven where there is dry land and daylight); and the Lagi-tua-ua (second heaven where the sun, moon and the stars reign and there is endless light). Lagi-tua-ua was believed to be where tagata tufuga lived. It is also known as Motu a Hina (Hina’s world) or Aho Hololoa (endless daylight). Hina lived with her children and they were the tufuga of Niue: • Lata, the tufuga of vaka (canoe) making • Mele, the tufuga of lalaga and tia (weaving) • Fakapoloto, the tufuga of hele lapa tifa (cutting of seashells for kahoa necklace making) • Hakumani, the tufuga of helehele and tutu hiapo (cutting and beating hiapo) • Matilafoafoa, the tufuga of tika making and throwing • Muitautini, the tufuga of all other creative works like composition of songs and chants These specialised skills of the tau tufuga (collective of master practitioners) indicate the creative talents present in Niue at that time. These tangible creative expressions were aesthetic as well as utilitarian in nature. Knowledge and skill were required at the various stages of the tāoga (treasure) being created: 1. Design particularly in ensuring functionality of the tāoga 2. Gathering and preparation of the raw materials 3. Aesthetics of the creation. As an example, hiapo (Niue barkcloth) making required extensive preparation prior to the painting of motifs on the barkcloth. The motifs consisted of geometric patterns like the manu lua (two frigate birds) motif and literal representations of nature like branches of trees. The motifs were symmetrically painted on the barkcloth using natural dyes and tools. Many of the geometric motifs are commonly found in other Pacific nation’s tapa or barkcloth, ngatu (Tongan barkcloth) and siapo (Samoan barkcloth)