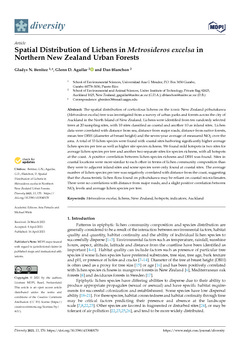 The spatial distribution of corticolous lichens on the iconic New Zealand pohutukawa (Metrosideros excelsa) tree was investigated from a survey of urban parks and forests across the city of Auckland in the North Island of New Zealand. Lichens were identified from ten randomly selected trees at 20 sampling sites, with 10 sites classified as coastal and another 10 as inland sites. Lichen data were correlated with distance from sea, distance from major roads, distance from native forests, mean tree DBH (diameter at breast height) and the seven-year average of measured NO2 over the area. A total of 33 lichen species were found with coastal sites harboring significantly higher average lichen species per tree as well as higher site species richness. We found mild hotspots in two sites for average lichen species per tree and another two separate sites for species richness, with all hotspots at the coast. A positive correlation between lichen species richness and DBH was found. Sites in coastal locations were more similar to each other in terms of lichen community composition than they were to adjacent inland sites and some species were only found at coastal sites. The average number of lichen species per tree was negatively correlated with distance from the coast, suggesting that the characteristic lichen flora found on pohutukawa may be reliant on coastal microclimates. There were no correlations with distance from major roads, and a slight positive correlation between NO2 levels and average lichen species per tree.

© 2021 by the authors. Licensee MDPI, Basel, Switzerland. This article is an open access article distributed under the terms and conditions of the Creative Commons Attribution (CC BY) license (https:// creativeco