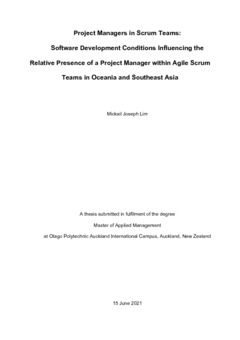 Software development and design are known to be the workhorse of a growing ICT industry. There are many software development project management models that have risen over the past 50 years. These were initially controlled by a Project Manager, who is the central figure for software development using earlier delivery models. Currently, none of these software delivery approaches are more popular than Agile delivery, specifically the Scrum Framework. The Scrum Framework prescribes that management is owned by the entire team and has done away with the Project Manager role. However, Project Managers still exist within Scrum in industry practice. As such, it is in the interest of this study to explore actual project conditions that would influence the need for a Project Manager in a framework that was designed to do without one. Secondly, this study intends to find out if the perception of success is affected by the presence of a Project Manager in the Scrum Team. At the time of this writing, no such empirical investigation has been done world-wide. There have been many studies looking at Agile practice and Scrum environments around the world, however, none has done so with a high focus on the Asia-Pacific Region. Therefore, this study will focus on this region, specifically within Oceania and Southeast Asia. A quantitative approach was selected, participant criterion was set, and a database search of LinkedIn was conducted. Among over 9000 results, 1500 randomised samples were determined and contacted to participate in an online survey. Of these, 938 users responded and expressed their interest to participate. Ultimately, 584 survey samples were collected and underwent analysis. The study confirmed that a significant number of Scrum Teams (almost half of the survey population) still had Project Managers. It was found that a team members’ Scrum experience, mixing Scrum with a traditional project management approach, and projects that work on existing software are conditions that statistically affected the presence of a Project Manager in the Scrum Team. On the other hand, the length of the project, team size, the geographical distribution of the team members, and even having multiple Scrum Teams collaborate on a single project had no influence whatsoever on the Project Manager's presence in the team. Furthermore, the study found that a Project Manager’s presence negatively influenced a Scrum Team member’s perception of success. The study was restricted to an online environment due to its scope and border closures because of a global pandemic. Furthermore, the purely quantitative approach limited contextual insight from the findings. It is recommended that further study be carried out to build on the exploratory data found, such as why a significant portion of the respondents are reporting large Scrum Team sizes, and the significant findings of the study, as discussed above. It also merits further investigation to determine  why a Scrum Team member’s perception of success is lower when a Project Manager is present, ideally using a systematic metric for success and failure.

Except where otherwise noted, this item's license is described as Attribution-NonCommercial-NoDerivatives 4.0 International