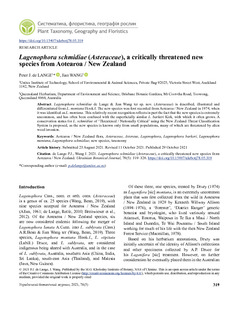 Lagenophora schmidiae de Lange & Jian Wang ter sp. nov. (Asteraceae) is described, illustrated and differentiated from L. montana Hook.f. The new species was first recorded from Aotearoa / New Zealand in 1974, when it was identified as L. montana. This relatively recent recognition reflects in part the fact that the new species is extremely uncommon, and has often been confused with the superficially similar L. barkeri Kirk, with which it often grows. A conservation status for L. schmidiae of ‘Threatened / Nationally Critical’ using the New Zealand Threat Classification System is proposed, as the new species is known only from small populations, many of which are threatened by alien weed invasion.

310411 Plant and fungus systematics and taxonomy

Except where otherwise noted, this item's license is described as Attribution 4.0 International