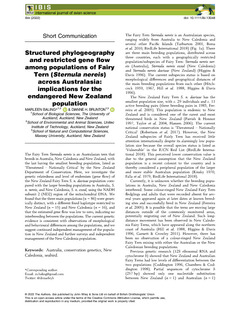 The Fairy Tern Sternula nereis is an Australasian tern that breeds in Australia, New Caledonia and New Zealand, with the last having the smallest breeding population, listed as ‘Threatened – Nationally Critical’ by the New Zealand Department of Conservation. Here, we investigate the genetic relatedness and level of endemism (gene flow) of the New Zealand Fairy Tern S. n. davisae population compared with the larger breeding populations in Australia, S. n. nereis, and New Caledonia, S. n. exsul, using the NADH subunit 2 (ND2) region of the mitochondrial DNA. We found that the three main populations (n = 86) were genetically distinct, with a different fixed haplotype restricted to New Zealand (n = 15) and New Caledonia (n = 16), and that the estimated gene flow was low to zero, indicating no interbreeding between the populations. The current genetic evidence is consistent with observations of morphological and behavioural differences among the populations, and we suggest continued independent management of the population in New Zealand and further surveys and independent management of the New Caledonia population.

Except where otherwise noted, this item's license is described as Attribution 4.0 International