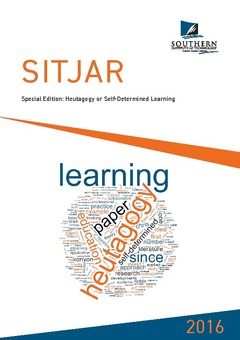 EDITOR'S PREFACE It’s been 16 years since the first paper was published on heutagogy in 2000 by the originators of the concept, Stewart Hase and Chris Kenyon. Since then there has been hundreds of articles, blogs and other conversations about the topic. Most importantly, there has been an increase in publications researching the use of heutagogy and an impressive number of doctoral students choosing to focus their thesis on the topic. Heutagogy has been applied in a wide variety of settings including lifelong learning, higher education, elearning, mobile learning, professional education, distance education, school education and vocational training, for example. This growing literature has meant that the concept of heutagogy has developed considerably since that first paper. One of the main developments has been the ability to draw on brain and other research that has enabled the articulation of an evidence-based practice, now central to the literature on heutagogy. The paper by Stewart Hase describes the connection between brain research and heutagogy, along with a number of theoretical developments and practical applications that have occurred since 2000. While heutagogy has been used in a number of contexts, a large proportion of the literature has been devoted to how self-determined learning can be applied to distance education, elearning and mobile learning. Those involved in digital technologies seem to find the notion heutagogy compatible with learning in the 21st century. The paper here by Aaron Davis is an example of this application in which he talks about developing a culture of thinking and collaborative learning in organisations through a case study in teacher professional education. Chris Kenyon, in his paper, provides a very practical example of the application of heutagogy with a specific focus on the use of experiential learning. Finally, Boon Hou Tay combines two of his passions, heutagogy and action research in describing how self-determined learners might go about their learning using soft systems methodology.

Individual articles in this Special Edition are © their respective authors. All articles and the compilation itself are published under the Creative Commons Attribution-NonCommercial 4.0 International license

Except where otherwise noted, this item's license is described as Attribution-NonCommercial 4.0 International