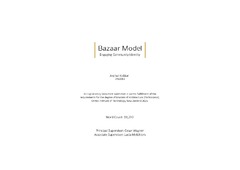 RESEARCH QUESTION Can the concept and architectural components of a traditional bazaar be used in Tāmaki Makaurau to reinforce its local community identity? ABSTRACT Individual identity plays a significant role in providing us with an understanding of the place we hold in this world. A community is created and represented by the actions of individuals that are influenced by their local context, which may include shared interests, experiences, and values. Traditional bazaars, as public spaces, are one of the greatest attainments of historical Islamic civilizations. The bazaar’s public spaces were regarded as a symbol of local community identity in their respective areas. The traditional bazaar is not only designed as a retail space, but is a public space serving as a microcosm in which economics of trade merged with aspects of social life. Ultimately, this had an impact of elevating the community by merging individual experiences and assisting the spread of shared values. Over time bazaars have successfully retained their true essence and are known as the ‘heart’ of the city. Tāmaki Makaurau has always been a meeting place for different ethnicities, cultures and where people interact collectively. Today it retains its position as Aotearoa’s largest and most populous city and the nation’s economic engine. Tāmaki Makaurau has become a melting pot of culture with its dynamically buoyant cultural milieu, evident through its openness to outside influences and people, with different identities that call it home. This unique identity of Tāmaki Makaurau and its connection to its roots should be embraced and reinforced through architecture. This project will explore ways to analyse a traditional bazaar model and break down key architectural concepts and components that make them successful public spaces that showcase the relationship between people, community, and their space. The goal is to adapt and develop these architectural components in an attempt to design a public space unique to a specific, chosen local context in Tāmaki Makaurau. The concepts and components of a traditional bazaar model will be researched and applied to create a complex, multi-purpose structure, providing a public space aiming to successfully embrace and reinforce the identity of the chosen local community. Site: Opposite the upcoming Karangahape Train Station on Mercury Lane, between Cross Street & Canada Street