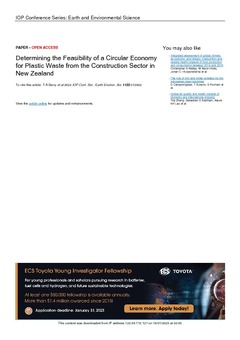 By 2012, the annual quantity of C&D waste produced by 40 countries had reached three billion tonnes, contributing 10-50% to total municipal solid waste around the world. Recent data from Australia and New Zealand estimated a combined contribution of approximately 28 million tonnes C&D waste to landfill for just 0.4% of the world’s population. If C&D waste was produced at an equal rate around the world, global production could be close to seven billion tonnes. In 2015, the global production of plastic waste from building and construction was 13 million tonnes. It is estimated that annually, C&D waste contributes ≥25,000 tonnes to the total amount of plastic landfilled in one major city (Auckland) alone. Waste audits from four sites demonstrated that this was predominantly polyethylene (PE) or polyvinyl chloride (PVC), and was derived from packaging, building componentry and building protection equally. The aims of this study were to implement a ‘foundations to completion’ plastic waste audit on a new secondary school in Auckland, New Zealand. This sheds light on the nature of the plastic waste, e.g., type, use and potential for recyclability or reuse. The aim was to also identify the challenges in the construction industry that hinder effective waste diversion from landfill, and to trial practical on-site solutions.

Except where otherwise noted, this item's license is described as Content from this work may be used under the terms of the Creative Commons Attribution 3.0 licence. Any further distribution of this work must maintain attribution to the author(s) and the title of the work, journal citation and DOI.